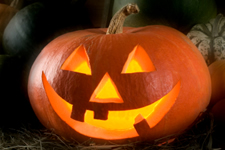 Halloween is upon us once again! We hope you have a safe and happy Halloween, whatever your plans have in store for you, whether it's a costume party, taking the kids trick-or-treating, or having a scary movie marathon at home.

Here are some fun facts about Halloween to impress your friends and co-workers on Oct 31.

Enjoy your Halloween and be safe!