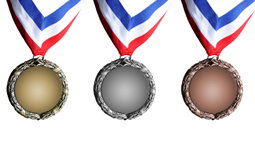 On July 27th more than 15,000 athletes and millions of people will gather in London to be part of an unique sporting cultural event, the Olympics. For 60 days, the length of the 2012 Olympic and Paralympic Games, the Olympic Park in London will be the center of the world.

To celebrate the 2012 Summer Games, Flury-Hinderks Insurance Agency has complied a list of fun facts:

Support Team USA and all your favorite events! Check out a list of scheduled events and results.