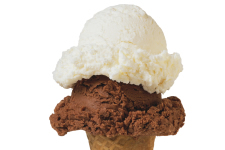 Some Unique Flavors to Make Yourself

Pour into a 2-quart container and cover. Freeze 6 hours or until firm.

Blend everything in a blender until smooth.

Store in container in the freezer until frozen solid. Slightly thaw before serving.

In a large bowl, combine the milk, cream, sugar, salt, vanilla, strawberries, and food coloring. Pour the mixture into the freezer bowel of an ice cream maker, and freeze according to manufacturer's directions.

Check out the International Dairy Foods Association website for more details about National Ice Cream Month as well as lots of other information about ice cream products and dairy farming.